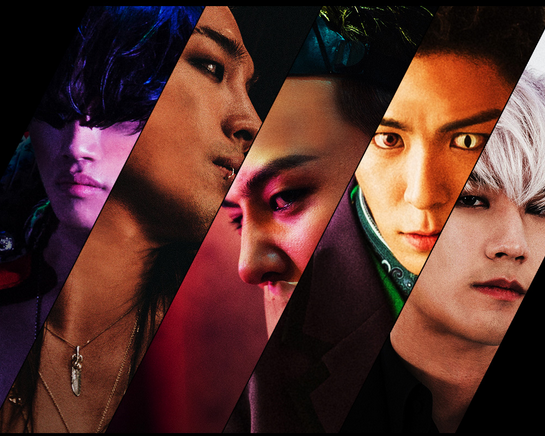 I really like Big Bang.  They were one of my first loves in Kpop and Monster still sits as one of my all time favorite songs.   So I was really excited for them to start releasing their videos for their album MADE.  So without further ado, lets start with Bae Bae.

Now Bae Bae is supposed to be a sensual love song.  The video was given a +19 rating for sexual innuendo.   Seriously?  Ukiss’s  Quit Playing video counts as +19.   This video was instead more silly than sexy.  Which I appreciated because I’m not a big fan of watching pretend sex in music videos, but since the video is goofy over all, I can’t quite understand why it got a +19 rating in the first place. The sexual innuendo for GD’s section reminded me a lot of Michigo and was about as clever. Which means it wasn’t clever at all.   Taeyang was amusing as the mexican cowboy,  but again, more silly than sexy.  I think Daesung and Seungri’s parts count as sensual, but the rap parts just didn’t do anything for me.  TOP was just silly, which he doesn’t do often.  I think TOP’s recent roles in recent movies, Tazza 2 in particular, have loosened TOP’s reserved nature some.  His love of art really showed in his section.  While I didn’t particularly care for this video and the elements were silly instead of sexual, it was nice to see a sillier side to TOP.   The lyrics for this song are sort of dumb and maybe that’s why they went with a sillier feel for the music video.  This song nor its video will be in any of my playlists.

The melancholy Loser  had a totally different feel.  While I enjoyed what was going on musically with this song,  I didn’t particularly like the pimp aspects to the video or the lyrics, but I think this song has an interesting message to give its audience.   IF, and its a big IF, they can realize it.   I’m not a big fan of the whole gangster pimp aspect of hip hop.   Its destructive and opens the door to a lot of abuse of men and women, especially for women.   I see more domestic abuse because of this life style than any other.  The lyrics of this song completely reflect that.  The pain, loss and distrust that casual sexual relationships  lead to is completely reflected in this song.

The lyrics are taken from the perspective of a guy who has been lost and has experienced betrayal as well as dished it out.   For kids who think that traditional moral values are out of style,  old fashioned or just silly,  this song reflects what happens when you don’t have them.  This is what you end up with.   Now, with me being almost 42,  I’ve seen my friends go through this.  Some are lost and some have worked themselves out of it.  But I see so many of my kids’ friends going through all this stuff and my heart sort of hurts for them.  So much pain could be avoided by not engaging in self destructive relationships.  I’m also not immune,  I have some jaded perspectives from my dating experiences.  I dealt with infidelity from my exhusband, and that leaves a mark.   While this is also a song that won’t be in my playlists (because I just can’t live in that emotional space on a regular basis)  its a thoughtful song if you pay attention.

I was disappointed over all with these two songs.  The pimp aspect of both songs and videos just is repugnant to me.  I hope there are more fun songs on this album.  IF these two are going to represent the rest of the album’s emotional presence, I just won’t be able to listen to it more than once.  I refuse to live in such negative  emotional space.  You might say that is strange since Monster is one of my favorite songs.   I say to you that Monster has more hope in its music than these songs do.

You can tell GD had his hand in these songs.  There is a lot of similarities with his solo work here so if you like that, then you should enjoy these songs.   I’m not a big fan of their solo stuff, so I was disappointed that this was the direction they chose to go in.  We will just have to see what the rest of the album brings.