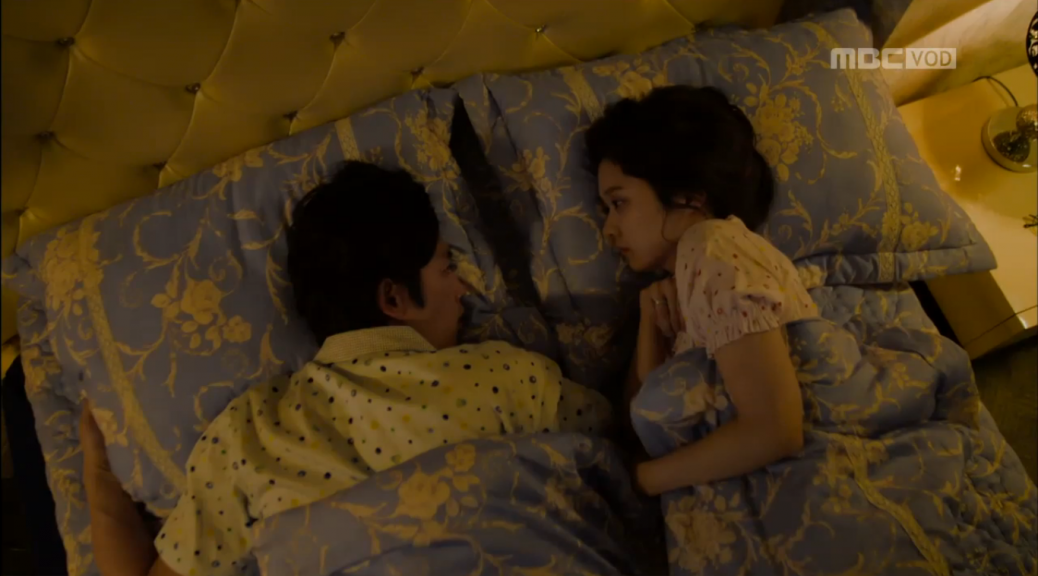 Gun has been slowly falling in love with Mi Young and when we left them last, Gun looked like he was about to take things in a whole new direction.  Come join Firnlambe and I as we discuss just how brave Gun is willing to be even when his world turns upside down….again.

You tease!   In the great fake out of this series, we’ve got a pregnant couple who have yet to actually kiss.  Gun chickens out on following what his heart and …. head really want to do.

Firnlambe: I was so disappointed that they had him chicken out … I mean I understand why, but It would have been a nice touch.

Wendilynn:  Especially with that lead up… gah!

What do you do when you come upon your rival on a morning jog?  Run until you’re both stupid.

Firnlambe: Ha! Gun is so proud of himself for beating Daniel, even if it was just by a couple seconds…..the simple things in life, right?

Wendilynn: *falls over laughing*   they are both so funny. 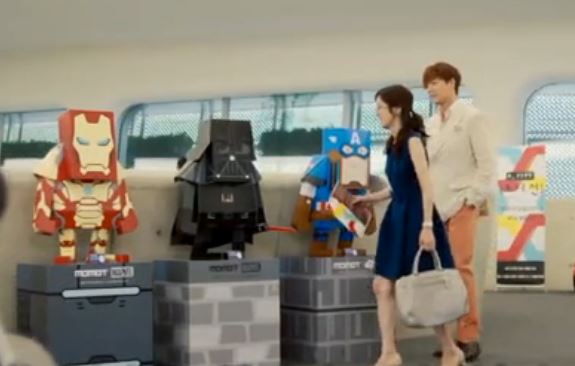 Star Wars for the Win!   Iron Man and Capt America are cool too, but this was funny that this art work showed up as Daniels’. 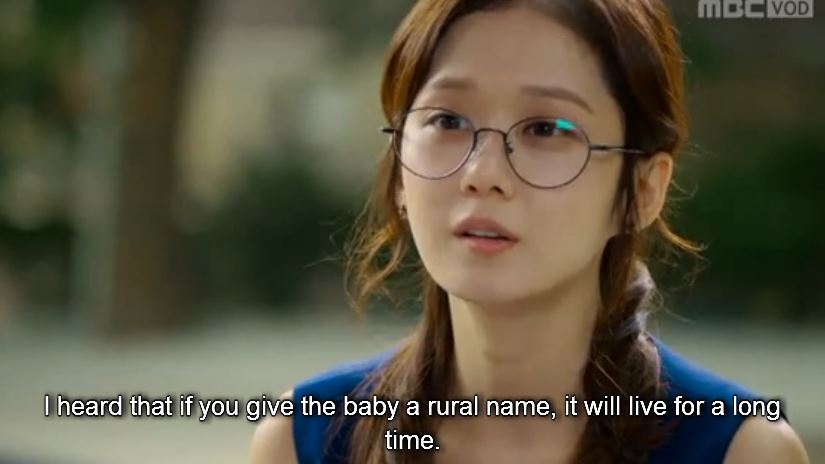 The Vikings believed giving children horrible names kept the monsters from eating them.  On that scale,  I guess Dog Poop works.

Firnlambe: Ok, but still …… there are a plethora of terms she could have picked… how Dog Poop won is beyond me.

Wendilynn: She mentions that her fetus name was the same.  So its probably nostalgic for her.  My youngest got the nickname of Tadpole, but that’s because I have an ultrasound at 7 weeks that shows his little tail.  *chuckles* 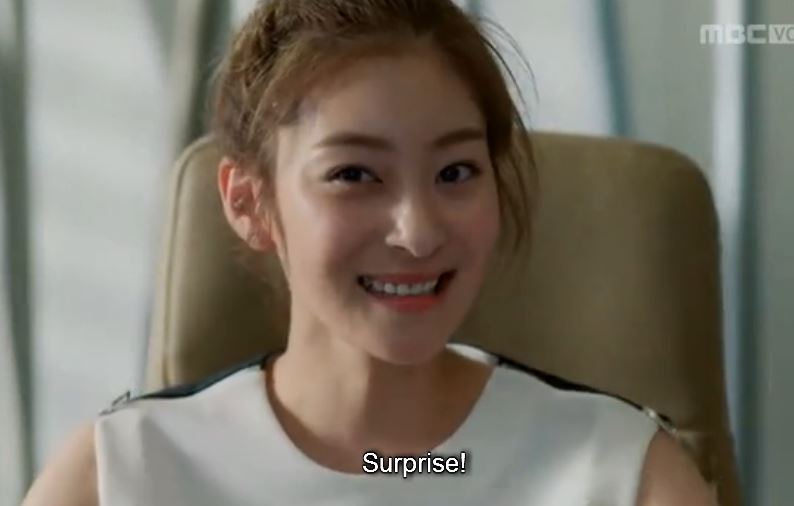 Trying to make amends, Se Ra has rushed home to Gun’s waiting arms.   Gun is definitely surprised…..and completely off kilter.  Mi Young is way more with it than her troubled husband. She advises Gun to not tell Se Ra yet so he can prepare her.

Firnlambe: I knew this was coming…..I knew it…..but I still had to pause the damn video for like an hour, before I could work up the nerve to finally finish the episode.

Wendilynn: I like that Gun wants to come clean right away, but only pauses because Mi Young asks him to.  Then after seeing how needy Se Ra was, he paused even more thinking maybe Mi Young had a point.  But I can tell he’s not happy with the confusion. 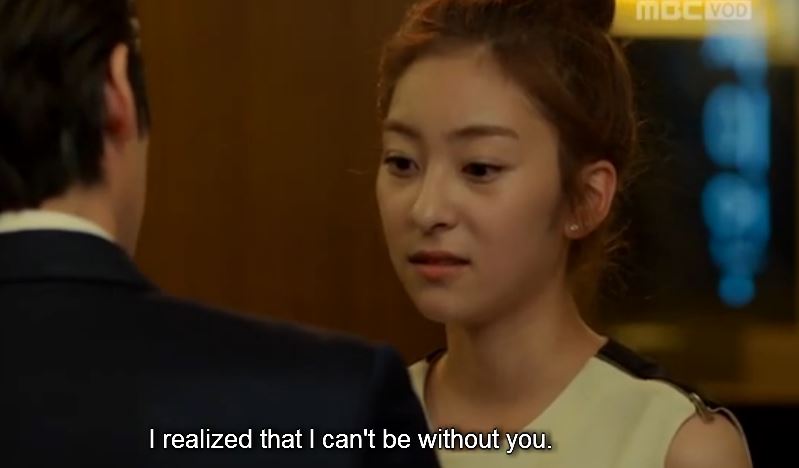 A little late for that realization, sweetheart.  Too bad Gun doesn’t have the heart to break the bad news to you yet.

Firnlambe: Selfish whore! ……..Wait….. did I say that out loud…..What I meant to say was……………yeah–no, selfish whore is the best I can come up with. Seriously woman!! If you had been in Gun’s shoes, and you were dating a man for 6 years who continuously left you in order to pursue their career, would you not have a change of heart if someone came along who gave you their everything all while knowing they’d never mean anything to you? 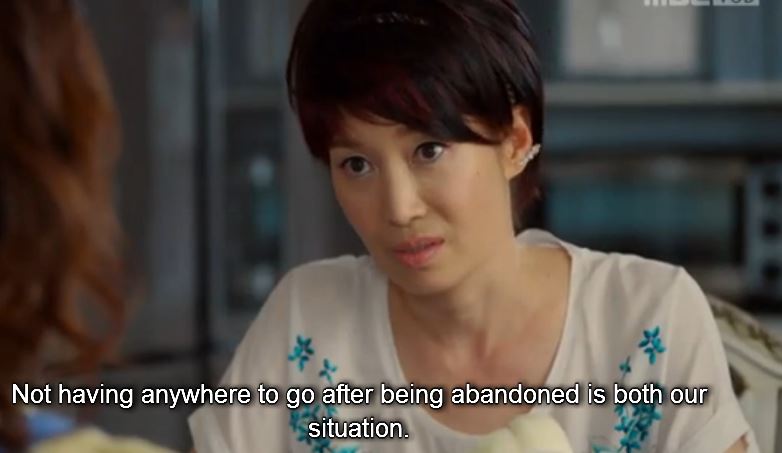 As petty as this woman is, she understands what it means to be the other woman.  This is probably the most honest this woman is with anyone.  And she gives Mi Young some good advice.  Advice she takes to heart.

Firnlambe: I’m hoping for a personality turnaround from the mother-son duo soon.

Wendilynn:  They had one in the T version, so there is hope that the duo straighten up eventually. 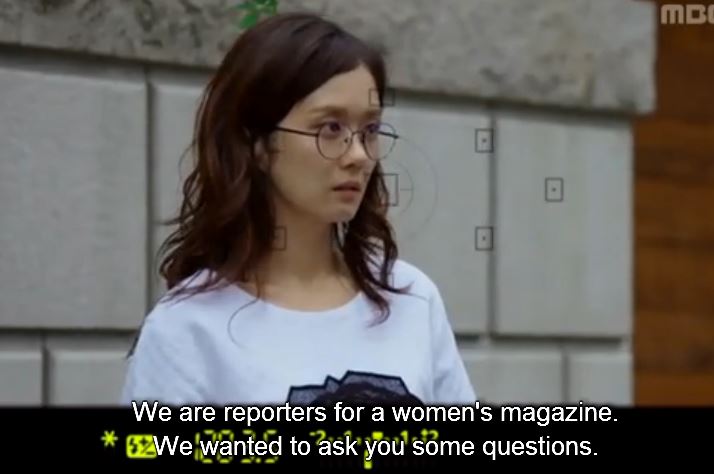 …and because we reporters have no respect for anyone, we’ll bully you until Daniel comes to rescue you.  The rumors are out and once again, Gun is not the one saving the day.

Firnlambe: I have to wonder if having her picture taken with Daniel will cause a scandal down the line. Also, we need to cut Gun some slack….He was pretty pissed that Director Tak didn’t let him know what was going on.

Wendilynn:  Gun is certainly distracted at the moment and playing host to Se Ra during all this at Mi Young’s insistence. 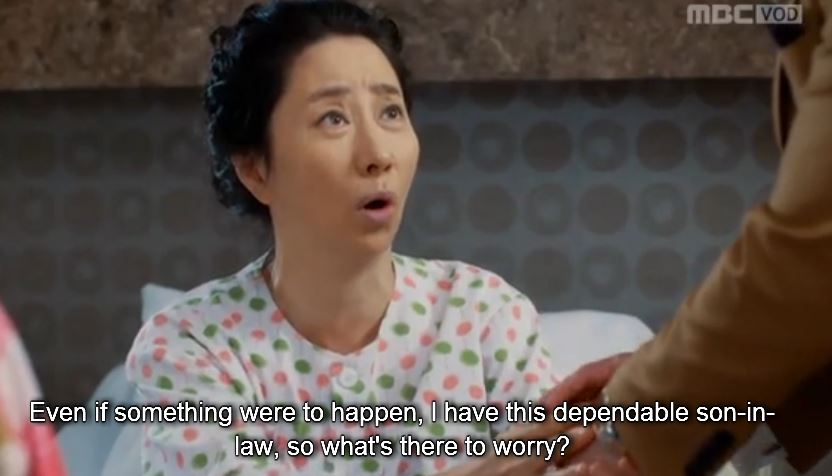 Mom has a routine issue but Gun comes unglued.  He likes having a Mommy again.  Not even Se Ra could keep him by her side when he found out she was in the hospital. 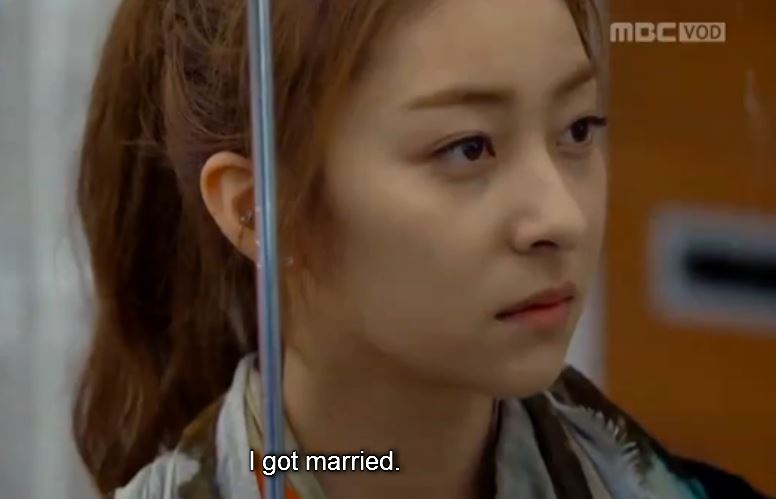 Se Ra is finally told the bad news.  Not only has her Gun become married, but he’s expecting a child.

Firnlambe: I feel no sympathy for this woman. If she hadn’t gone and said this: 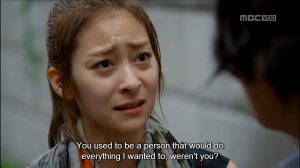 I maaaaaay have felt a twinge of sympathy for her. Alas…she does…This statement speaks VOLUMES about how twisted her view on their relationship was/is, and how twisted Gun let it become. Letting Se Ra get spoiled to this point in the relationship was not healthy for either of them.

Wendilynn:  No it wasn’t.  Knowing Se Ra’s history the way we doing having seen the T version, her selfish neediness is understandable, but I have to agree with you that they were no longer a healthy relationship.  If they had been, then Mi Young would not have been able to have such an effect on Gun. 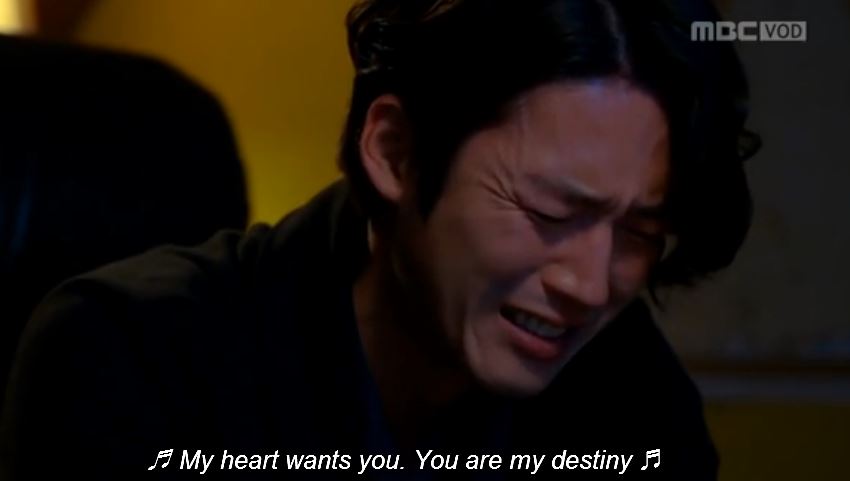 Gun is having a hard time.  He’s hurt his precious Se Ra.  The life he once dreamed of is gone.  He has obligations to Mi Young he can’t ignore.

Firnlambe: While I felt super sad for Gun, saying goodbye to a 6 year relationship could not have been easy……I felt worse for Mi Young, who’s sitting right outside the mancave listening to the man she’s started to love, sob uncontrollably and be unable to say or do anything to comfort him.

Wendilynn:  Yes, I was teary for both of them.  Mi Young knows that for all intents and purposes, Gun is having the hardest time of anyone.  All she does is offer her quiet understanding and support without conditions.  Which is what is stealing Gun’s heart in the first place. 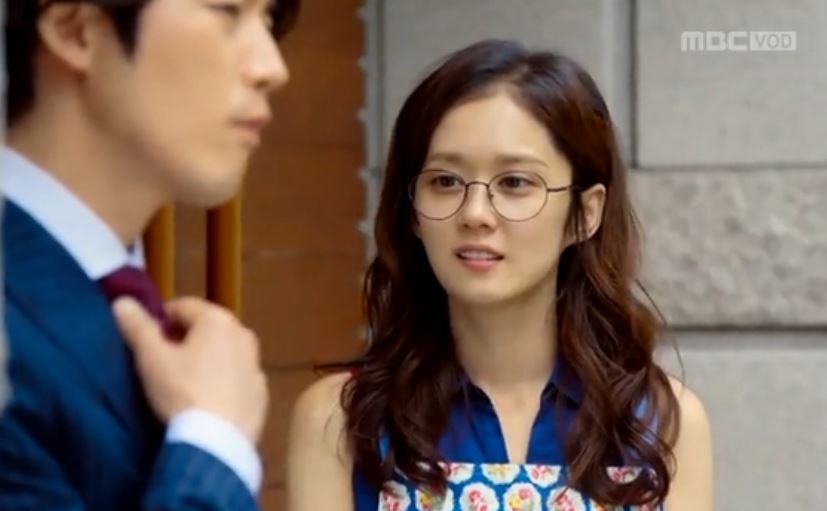 Mi Young understands more than anyone the heartache Gun is going through.  While Gun tries to find his equilibrium, she quietly waits for him to figure it out.

Firnlambe: He could have gone about this a little better…..switching back into Cold Gun so rapidly was a little harsh. I mean, I totally understand, I just wish he was a little warmer to Mi Young considering all they’ve been through.

Wendilynn:  I’ve seen this happen in several dramas.  It must be a cultural thing in dealing with “returning to someone”.  I don’t think I’ve run into it in western stories.

Mi Young’s first foray as the Madam of Jangin Chemicals  has not gone well.  She’s been gossiped about, had wine dumped on her and had drunk trash try to embarrass her.  Thankfully, Gun does show up, finally aware of the rumors, to put them to rest and to let everyone know just how special Mi Young is to him.

Firnlambe: I love that Gun used the same tactic that Mom used while they were on the island. Playing up her “faults” in order to make a point about how genuine she really is……sidenote….where was grandma during all of this? I can’t imagine she would have just let her precious Granddaughter-in-law be torn to shreds like that

Wendilynn: Good question, I had a hard time believing that her little meeting would keep her unaware of what was going on. Especially as they were using a microphone.

Firnlambe: So close!!! A kiss to wipe away her tears was super sweet…..but I would have been happier with a lip lock.

Wendilynn:  This whole scene was sweet.  Gun is quite the romantic.  I wasn’t enamored of this particular actor and the smarmy way Gun was played in the beginning had me doubting I’d fall for him, but oh my goodness, do I have a big crush.  This is developing a lot of the magic that made the T version of this show one of my favorites.

Gun’s heart is clearly falling for Mi Young.  Mi Young is scared to trust that she even has the right to fall in love with Gun.  She worries that if she accepts his feelings of care and concern then she will get greedy.   I say be greedy girl.   Join us for episode 9 recap when we look to see if Mi Young will get greedy and if Gun will finally give his heart to Mi Young without reservation.